The Labrador Retriever is an incredible dog!  Their hardy physical attributes could not be more different than their gentle and affectionate nature. The Labrador has a need to please, which indicates why this dog breed can be regarded as the ultimate family dog. The face of a Labrador evokes the most adoration, perhaps more specifically his ability to express his love of life, understanding and affection through a gentle look or delicate movement. 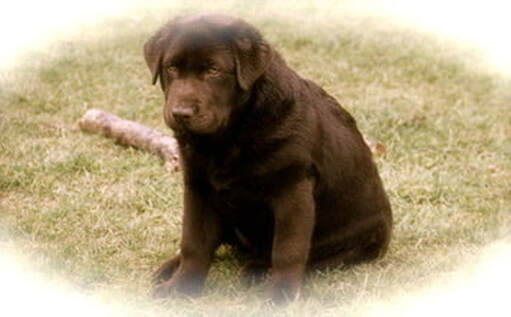 ​Fishermen from England, Portugal and France were the original seasonal visitors, and then settlers, on Newfoundland.  It was here in this fishing community that the breed's combination of mental and physical attributes were forged.  It is generally accepted that the dogs they brought with them, and then subsequently crossed, form the bloodline of the dogs that evolved into the Labradors today.

By the mid 1700s, the fishing village of St. John's in Newfoundland was expanding and the local fishing dogs came to be known at the time as St. John's dogs.  Hardy but even tempered, these dogs worked the small fishing vessels with their masters, diving into icy waters to retrieve spilled fish, lines and nets.  Powerful legs and tails propelled them through the frigid waves;  dense, water repellent coats protected them against the cold and shed water easily;  while strong but gentle mouths retrieved the catch unmarred for their masters.  And at the end of a hard day, these dogs would return home to the fishing families and the playful company of their children.

In the early 1800s, the Labrador came to England, mainly through the main fishing port of Poole in Dorset.  Sportsmen hunters acquired these dogs for their retrieval skills on land and water.  The Earl of Malmesbury, widely acknowledged as the first champion of the "Labrador Retriever" in England, is one such gentleman.   Having imported St. John's dogs from Newfoundland, Malmesbury established his own kennels and kept a pure breed,  In the 1830s, St John's dogs were also taken to Scotland to the Duke of Buccleuch's kennels.  Later in the century, dogs from the two kennels were matched to preserve a quality breeding stock.

At this point, the breed began to be known as Labradors, although the origins of the name are somewhat lost in time.  Regardless of its origin, the Labrador name was used be Malmesbury and others to differentiate their dogs from the original St. Johns dog.  By 1900, the breed was firmly established in England and recognized by the Kennel Club in 1908.  Following the breed's registration at the Kennel Club, the English royal family established a Labrador kennel;  an interest that remains strong to this day exemplified by Prince William's black Labrador, Widgeon.

As the 19th century progressed, the Labrador breeds popularity reached beyond the hunting community as the dogs social attributes and natural affinity for people and family life were recognized by the public.  The breed was registered by the American Kennel Club in 1917.  Interest buoyed initially by wealthy Americans visiting England and impressed by the Breed's performance and royal connections.  The breed has since become one of the most continuously popular breeds in Europe and America.

Although the Labrador Retriever has become established as an enjoyable family dog, the breed's working capabilities have also been utilized in a range of ways extending to working out in the field as a gun dog, drug detection, search and rescue and most famously, as the guide dog.  Regardless of the role your Labrador fulfills, you can be sure that he is absolutely the best at what he does.
​

Strongly built, short-coupled, very active;  broad in the skull with defined stop;  broad and deep through chest and ribs;  broad and strong over loins and hindquarters.  Powerful muzzle with wide nose.  Medium sized ears, hanging close to head and set back.  Jaws and teeth are strong with perfect scissor bite.  Brown or hazel eyes with an intelligent and good tempered expression.  Neck clean and strong.  Back has level top-line.  Forelegs are well boned and straight from elbow to ground when viewed from either front or side.  Hindquarters are well developed, not sloping to the tail.  The distinctive otter tail is strong, thick near the body then tapering, and completely covered with hair.  Distinctive coat is short, dense, without wave or feathering, giving fairly hard feel to the touch, and has a weather-resistant undercoat.
​

​The Labrador Retriever is intelligent, keen and biddable with a strong will to please.  He is of a friendly nature and should have no trace of aggression or undue shyness.  Labradors are very friendly and excellent with children.  They are very easy to train.  Most Labs are generally good with other pets and all Labs are moderately dependent on people.
​

Labs are not for everyone.  They do require a certain amount of work.  Labs need lots of exercise, both mental and physical.  They blow their coat twice a year which requires a little more grooming.  They may have genetic weaknesses such as hip and elbow dysplasia, and eye defects. At White Pines Labradors our breeding stock receives OFA clearances and yearly eye CERFS to minimize the risk of health problems in our puppies.  You can be certain that every pup who leaves our home has great genetics and will make you proud.  Memories will be made that will last a lifetime, along with an inseparable companionship!  So if you feel like you want to enjoy the great benefits of owning a lab please fill out a puppy application to be approved for a pup!
​Treasured Friend

I lost a treasured friend today
The little dog who used to lay
Her gentle head upon my knee
And share her silent thoughts with me...

She'll come no longer to my call
Retrieve no more her favorite ball
A voice far greater than my own
Has called her to His golden throne.

Although me eyes are filled with tears,
I thank Him for the happy years
He let her spend down here with me
And for her love and loyalty.

When it is time for me to go
And join her there, this much I know...
I shall not fear the transient dark
For she will greet me with her bark.